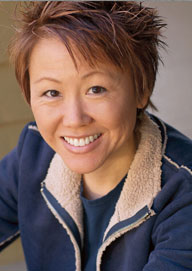 In order to write the Girl of the Year™ 2011 books Aloha, Kanani and Good Job, Kanani, Lisa Yee took surfing and standup paddleboard lessons, and went snorkeling, in Hawai‘i. Plus, she sampled shave ice dozens of times—all in the name of research, of course! Lisa also met with Hawaiian monk seal volunteers to learn more about the seals’ plight. “You never know if you’ll come across an endangered monk seal,” she said, “so when I saw one hauled out on the beach, it was thrilling!”

Lisa Yee’s debut novel, Millicent Min, Girl Genius, won the prestigious Sid Fleischman Humor Award. In 2010 she will have over one million books in print, including Stanford Wong Flunks Big-Time, So Totally Emily Ebers, Absolutely Maybe, and her new series starting with Bobby vs. Girls (Accidentally) and Bobby the Brave (Sometimes). Also out in spring 2010 is Warp Speed, about a Star Trek geek who gets beat up every day.